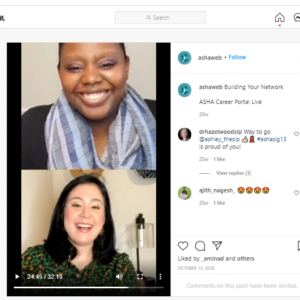 “Thank you everyone for joining us for tonight’s Career Portal Live. My name is Alexis Redmond. I’m ASHA’s director of career management resources. Tonight we’re joined by Ashley Lopez, an ASHA-certified, speech-language pathologist from Texas. And just like every Live, we’re going to kick it off with, ‘Ashley, share your career journey.’”

In fall 2020, Redmond (pictured top) developed an Instagram social media series, Career Portal Live, where she interviewed members about their career journeys for 20 minutes with prepared questions and then allowed the audience to ask questions. “The development process for each episode is about four or five hours per speaker and no real costs,” she said. “Now we’re in a situation that we’re going to be able to do it with vendors. Our sponsorship team valued the offering at $2,500 per episode, and for this year, they have sold seven already.”

For a long time, the job board of the American Speech-Language-Hearing Association (ASHA) was supported by a sales director who would do some programming and an occasional article, “but the focus really wasn’t on enriching the member experience,” says Redmond. She took over the task in 2017 and has worked hard to make it a full career portal, and the engagement and revenue have followed.

Redmond has a natural joy and attentiveness that serves her well in these personable interviews—and in our recent Zoom call. (Here’s a link to the talk shown above.) It comes from someone who is helping members at all levels achieve their career goals and giving her organization a tremendous resource—the ASHA career portal—that drives engagement and brings in revenue, especially important in these virtual times.

‘Pulling All This Together’

In this story of career portal creation, Redmond conveys that it’s not easy and takes time to get right, but the rewards can be huge.

She started at ASHA in 2015 as a manager of mailing list sales on the sales team. “We had a separate recruitment advertising team. They had the initial assessment, and they brought us all in to pore over the findings. I’m one of those people that has a weird Jackie-of-all-trades background. I’m an attorney by training, but my bachelor’s is in sociology and anthropology, so I just have a fascination with people in society and how things work and what makes people tick.

“I’m always that person who gets pulled in on projects because I see the stuff that people don’t see. ‘What about this? How does this play with this?’ When they got the feedback, [the supervisor said,] ‘you need to make the job board a career step [place].’ A lot of people in our office weren’t really looking at LinkedIn or other platforms or even at Instagram where people are sharing professional information and resume tips and interview tips.”

Assigned with “pulling all this together,” Redmond began the process to make it a better member experience.

Start with a full content audit. “They had had various articles [posted] throughout the years, and so the challenge was that it wasn’t always a time when people were job searching or transitioning careers,” she says. “Maybe somebody wrote something cool and posted it, but there was not that kind of centralized place to find the information.” Maybe staff could find the relevant job articles, but members couldn’t. Slowly, they started figuring out the content gaps.

Conduct persona development. “One of the cool things we did was go through a persona development process and brought in our practices teams, our research team, and looked at all of our surveys from the last decade or so. We mapped everything we knew about members—if they were students transitioning to professional, or mid-career looking to advance [or] an audiologist working in an ENT clinic…” Redmond recalls.

“We mapped out what resources we have for them, what’s keeping them up at night. What questions do they have when they experience going through career transition and then what content we could create. So that drove our marketing strategy because we knew the cadence of when they’re searching, when we had peak volumes of those job postings. Then we either curated content we already had or [developed] new content, so within the first year of the site made 30 pieces of content.”

Build in self-advocacy. Redmond says that they faced particular challenges in creating a comprehensive portal because their members can work in such a variety of settings and situations. In the past, she said, there had been too much of a “Pollyanna” approach—just go do your work and good things will come—rather than any real self-advocacy or personal brand-building lessons.

“We tried to always add a layer of that self-advocacy, making sure you’re being transparent, so that people understand what you do,” she says. “It makes them feel more empowered. So we were just trying to layer these things so that it wasn’t just like, ‘Here’s a job board, go there when you have a need,’ instead of, ‘Here, we’re always typing out information that is going to help you in your day-to-day.  Then, when you need to find a job, you will actually come to us.”

Be more aligned, more mobile-first. “We knew that we needed to be more innovative with how we present information,” Redmond says. That turned into building their own improved brand voice, “more like, ‘we’re in this with you, we’re together, we’re aligned.’” That allowed them to soften their language a bit and become more approachable.

Not only did the career portal reflect that new brand voice, but the strategy became more deliberate and mobile-focused. “Instead of having like 2000- or 3000-word resources, it was like, ‘Let’s do what’s scalable from a phone,’” Redmond says. “What’s going to be something that someone can do for just a few minutes and feel that they left with a nugget that was valuable?

“Our members have heavy workloads; they don’t have time to always read a treatise, so it was really about thinking what does somebody need to know in this moment, based on the certain experience that they’re having. How can they feel more comfortable and confident in their newness?”

Listen, survey. At that point, staff listened. Surveys were conducted and focus groups brought in to talk about the skills members needed. ASHA also discovered the value of sponsored content marketing packages, where “inside information” and “behind-the-scenes insights” could be conveyed to “help candidates stand out in their jobs and offices… from the people actually doing the hiring.”

And that meant revenue. It was a win-win situation. “We can give tips and resources, but [it’s better to] go to the horse’s mouth and ask, ‘What are you really looking for?’” Redmond said. “We know what the job posting says, but when you’re in that interview, what are those things that are going to really make a candidate stand out?”

Connect on Instagram and add sponsors. That’s where Career Portal Live came in with Redmond interviewing members to talk about career advancement or mentoring. Now they’ve invited sponsors to talk about issues like salary negotiation. “For us it was a matter of going to the sponsors and saying, ‘Our members have this need. How can we partner with you to fill that need and get you some exposure in the process?’” Redmond says. “Because right now, with not being able to do a lot of in-person stuff, people are looking for thought leadership opportunities. So if you can make it really impactful [and something that] members can enjoy, [sponsors will] get their return investment.”

Think of sponsors as partners. Redmond has worked with the sales team to develop a sponsor strategy that’s more of a partnership. “For recruitment advertising sales, that’s meant a lot of time nurturing those relationships,” she says. “We know that they have different needs and want more exposure and engagement. Our student organization has done networking events where the sponsor could come and present about what’s happening in the industry”—again, giving that inside view.

Later on, Redmond tells a story about a student she met two years ago at one of those events. “He came in and said, ‘I really don’t need this, I’m pretty well connected.’ And I said, ‘Well, let’s talk about LinkedIn,’ and he was like, ‘Okay.’ Turns out the advice—posting articles he wrote—turned some heads. He’s now on faculty, running a clinic and doing early childhood hearing screenings for one of the major hospitals in Utah. “I didn’t think that was going to be possible,” he told her.

“An organization may have a hard time hiring because, for us, it’s a lot of rural clinics, and if they’re able to get a voice and share the benefits of working there, they can get really good candidates,” Redmond says proudly. “So it’s really helpful once everyone gets to the table and shares those insights and those dialogues and they turn into opportunity.

“And if you can get [students] engaged and feeling really tied to a community that supports them, they’re going to be around forever.”

Redmond’s role has remained in the marketing and sales team. “So everything organically has that duality of understanding that there has to be a B2B aspect or a vendor aspect, whatever we’re doing on the B2C side,” she says. “So it’s really about finding those opportunities to add value. Once you know what the pain points are or where there are gaps or need on either side, that’s when you can get anything.

“I think about little ways to bridge that gap and start with dialogue between the job seekers and employers so that’s where we either issue new content or have an event or we’ve done some things like social media stories or reached out to the podcasts,” Redmond adds.

After trial and error, Instagram, not the more expected Facebook, has become the go-to for the career portal. “When you’re going the route of career development content you have to know where the places are that they’re really making their decisions about their career stuff vs. just consuming content. So you can’t treat every channel the same.”

Again, she says, a key is to listen and not always join the conversation. “Just being in the space and observing what’s happening can be really helpful to keep your content grounded. Sometimes we can get very internalized and work with our head down.”

It’s really about thinking through all the touch points and all the areas that people may be engaging that could be an opportunity to get in front of them. Sponsors now come to them on a “pretty regular basis. The other thing is that we’re always being innovative,” Redmond says. “What new ways of presenting content are out there? Let’s see if this is of interest to the members.”

And that’s what it comes down to—member value. “How do they just navigate the space as an individual—that was where we had to make our pivot because we were getting beat all over the place by big-box job boards,” Redmond says. “We knew we had to do this better because they can be nimble and focused and we’re doing so much stuff. We [knew] that if we didn’t really focus on it and figure it out, it would take us years to catch up.”