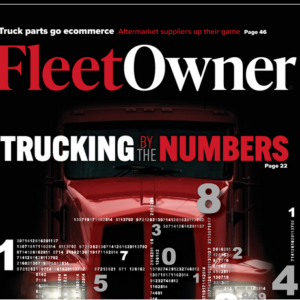 This is the first article in an ongoing series on the 2022 Neal Award winners—what makes them special, what is replicable, and what lessons we can learn going forward. Endeavor Business Media’s FleetOwner engages us early with its design and tough stances, gives us easy-to-digest infographics and then pours it on with wonderful prose.

“Today, the words diversity and inclusion go hand in hand,” writes executive editor Cristina Commendatore in an article titled ‘Diversity in Trucking a Must’ in Endeavor Business Media’s 2022 Neal Award-winning issue of FleetOwner. (It won for Best Single Issue of a Tabloid/Newspaper/Magazine – brand revenue $3-7 million.) “Without an inclusive culture, it’s impossible to maintain diversity within any business operation. That’s particularly important for the trucking industry, which has a growing labor shortage and hasn’t traditionally been known as the most diverse industry.”

She points to Total Transportation in Jackson, Miss., which has a team that specializes in going to historically Black colleges and universities to promote the trucking industry. “The company also touts having nearly three times more female drivers than the national average.” “It’s easy to be diverse,” said CEO John Stomps. “Inclusion, however, is a culture; you’ve got to have that from the top down.”

That’s just one informative article in an issue chock full of them. Here are some of the things that the Endeavor Business Media staff got right in putting together this winning issue.

Address issues of the day. There’s an article how the vaccine mandate affects the industry, especially praising truckers. “When many in this nation sheltered in place, you maintained composure and answered the call,” said American Trucking Association CEO Chris Spear. He also praised the infrastructure bill that passed. “This bill is an investment in our economy, in our nation, and in our daily lives.” Other articles include: coverage of driver shortages; Volvo Trucks commitment to offer a fossil-free commercial truck lineup by 2040 and a 50% reduction in carbon dioxide emissions by 2030; a focus on how data previews the tire market; the ecommerce market for truck parts; and an auction by a salesman for Inland Kenworth-Phoenix to benefit Truckers Against Trafficking.

The writing is first-rate. This is not your typical trucking lede—for an article titled The Long and Arduous Journey about the passing of the infrastructure bill: “The road trips we used to take as a kid, whether to Florida or Maine, were inevitably surrounded by great memories that lasted a lifetime,” writes David Heller. “In that regard, I must reference the adage by Ralph Waldo Emerson to describe the recollection of those long family jaunts: ‘Life is a journey, not a destination.’” An IdeaXchange expresses thoughts of many industries. “If we don’t start talking to young people about how important trucking is and the cool technology on trucks, we will have a hard time getting fresh faces behind the wheel.”

A great use of infographics. Trucking by the Numbers – A Supply Chain in Crisis, also by Commendatore, contains 12 pages of infographics, from Freight Forecast by Mode and Type to Substances Identified in Positive Drug Tests to Top Ten Truck Bottlenecks. A couple years ago, I recall Danica Stanciu, vice president for Politico, telling us: “We’ve invested quite a bit in infographics. The use cases for this are myriad. They can be used to help a sales team get up to speed [or] to [assist in] providing content and news to subscribers. Listen to your audience and understand what they need.”

Good use of the last page opinion article. “Last Word” may not be an original title, but Endeavor makes the best use of the space with an article titled “Everyday Heroes,” about proceeds from the sale of a specially built truck going to Truckers Against Trafficking. In 2017 they raised $83,000 and in 2019 $162,000. “Truckers are making a big difference in identifying a reporting possible cases of human trafficking to law enforcement.” “They are our eyes and ears out on the road and are relied upon to report suspicious activity,“ said Kendis Paris, executive director of TAT.

Clever touches. The message from the executive editor is called From My Lane. There’s an excellent top industry concerns column. The biggest 5 issues are: driver shortage, driver retention, driver compensation, lawsuit abuse reform, and truck parking. We can substitute any niche in the first three of those. An article on Yonkers, NY’s 1,400 municipal vehicles tells how they are maintained in a single shop with the latest technology.

Design matters. The red and black cover really shines, with its graphic use of numbers. And then they continue with that image in the contents and the feature article spread. The opening pages offer reports from their conference with an engaging top brick design tying it together. Also impressive is a full-page photo of the manufacturing of direct-fit diesel filters showing a woman doing the fiery work.