On this World Press Freedom Day 2022, we salute the invaluable journalism being done worldwide—and, of course, within our own AM&P Network. “Freedom is a continuum and is never guaranteed,” writes SIIA President Jeff Joseph. “SIIA will continue to stand up for policies that support press freedom and safety. And we will continue to celebrate the brilliant, quality journalism and publishing coming out of associations and industry that seeks to better our world.” 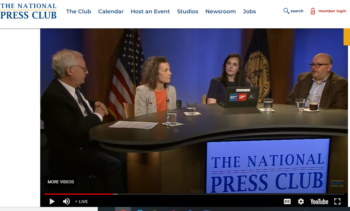 I just finished watching an all-star panel (pictured here) from the National Press Club that included Jason Rezaian (on the right), Washington Post global opinions writer, author of the book “Prisoner” and producer of the popular podcast “544 Days,” referring to the time he was unjustly imprisoned by Iranian authorities until his release in January 2016.

Interestingly, one of the major themes of the webinar was to support and “subscribe”—to newspapers, magazines, newsletters and especially community news. Jen Judson (third from left), 115th president of the National Press Club and a land warfare reporter for Defense News, said that’s where she got her start, as did many of us. “If you can get in and support community news, that will be so important,” she said. “Subscribe.”

If B2B, niche publishing and associations are made of anything, it’s communities—of people, of topics, of places, of challenges, of resoluteness.

“We can all afford it. We can’t afford not to,” said Rezaian, speaking about support for journalism, before addressing safety. “Without this community—the National Press Club, other press freedom defenders—we wouldn’t be learning [the most important] lessons… It does take a village.

“And we’re coming to the realization that the government and non-government actors need to come together and cooperate. It should be a national issue. It’s one that’s getting worse and worse and worse. And if we don’t address it now, it’s going to get to the point where none of us are going to feel comfortable getting on the plane with our blue passport and going around the world because we will be a target.

“Today is the day to take stock and subscribe,” Rezaian added, “and save democracy.”

“We are in a global war for freedom of speech, freedom of thought,” said Kathy Kiely, Lee Hills Professor of Press Freedom Studies at the University of Missouri and former reporter for USA Today. “Support democracy. Subscribe.” She spoke about the importance of “having someone who is really part of a community [covering that community] and having that institutional memory. But salaries need to improve.”

Here are 5 examples from our member organizations from journalists who are part of their communities:

Ollie’s Last Day: The Impact of a SIDS Death on First Responders. A week ago, on Lexipol’s FireRescue1, Linda Willing, a retired career fire officer and founder of RealWorld Training and Consulting, wrote this moving story about a baby they could not save—and the effects that has. “I am the eye of the hurricane, Ollie and I as one, with the world falling apart around us. It is simple – I breathe, I massage his heart, I hold him inches away from my own face in silent prayer, and he does absolutely nothing.”

An Empathetic Ear—and More—for Veterinary Professionals Struggling With Depression. The American Animal Hospital Association has a blog called NEWStat that was an EXCEL finalist last year for this blog post. “Between 1979 and 2015, 398 veterinarians died by their own hands,” it begins. “…And while this appeared to be a crisis of major proportions, many people in the profession weren’t having ‘The Conversation,’ at least not openly. Thankfully, that’s changing. Because sometimes, talking about it can help. Or, in this case, posting about it.”

A Devastating Stroke and a Speech-Language Revelation. In this recent, first-person account for the American Speech-Language-Hearing Association’s LeaderLive, Grace McConnell writes: “Through the night, I lost control of my right side and could no longer sit or stand. The shift change 12 hours later saved my life, when the head of the ER recognized a stroke.”

We Have Been Here All Along. American Chemical Society’s Chemical & Engineering News won the 2022 Neal Award for Best DEI Coverage for this special issue. “Inspiration comes from within homes, communities, and the broader world—and it is key that when young Black people and other underrepresented people look around these places, they see chemists and engineers who look like them,” wrote guest editor Paula Hammond. “Exposure is key to engaging future chemists and chemical engineers.”

Heart Attacks Struck Sek Kathiresan’s Family. He’s Devoted His Life to Stopping Them. Biopharma Dive’s Ben Fidler won a 2022 Neal Award for Best Profile for this heart-rending story. “This story might be familiar to the millions of people and families affected by heart disease, the world’s leading cause of death. But it’s more than that for Kathiresan, who, when Senthil died, was a cardiologist and emerging as one of the field’s leading geneticists… Kathiresan channeled his despair into motivation.”

Of course, important journalism does not have to be life and death. We are all deeply invested in the niches we represent. But these articles capture the spirit, dedication and humanity that is at the heart of our missions.

Thanks so much for reading on this special day.