There’s an old saw in baseball that incredible success for a batter still means failing seven out of 10 times. Now, of course, we can’t do that in business, but it does say something about becoming accustomed to failure and learning from it for the next time. Getting hybrid events right will require experimentation from some of the leading media companies.

So the question becomes, amidst all that data we’re getting, is there still a place for failure and intuition? Absolutely. I often come back to this quote from Rajeev Kapur, CEO of 1105 Media, from a couple years ago.

“I tell everybody that works for me that I’d rather have them try and fail than not try,” Kapur said. “And that I want them to make a decision. We can fix a bad decision; we can’t fix a no-decision. No one will ever get fired for trying something new or for failing at something they tried to do. I reward people who try, people who think outside the box. I am doing everything I can to empower my team all the way down the chain to say, ‘Look, this is what we need to do for the customer.'”

One of those people, Troy Schneider (pictured), is 1105 Media’s editor-in-chief of both FCW and GCN (originally known as Federal Computer Week and Government Computer News, respectively), two of the oldest and most influential publications in public-sector IT.

A former managing director for electronic publishing at Atlantic Media, Schneider will speak THIS THURSDAY on an AM&P Network webinar and discussion titled, Mining Success from Adversity: 1105 Media Shares Its 2022 Game Plan for Hybrid Engagement. (Register here.) 1105 Media was one of the first to pivot to virtual events back in March 2020, and I suspect that they will be similarly ahead of the game in planning hybrid events. 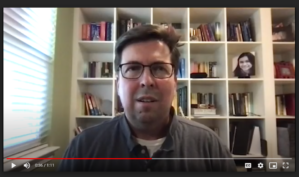 “We’re going to talk about how we made the pivot from live events to virtual almost on a dime when COVID hit,” Schneider tells Performedia president Peter Hackes in a video promo for their Thursday talk. “What we’ve learned over the last year-plus in doing that and how we’re taking those lessons and moving forward as things open up, and we start bringing live events back in the mix. But certainly keeping the benefits of virtual and hybrid events going forward.”

Given the culture that Kapur has created at 1105 Media, it will be most helpful to hear how they are approaching hybrid events. Kate Lucey, a former digital editor for Cosmopolitan UK, agrees with Kapur, that there are advantages to both success and failure. “If something [messes] up, you can look at your stats and figure out what went wrong,” she said. “Try new ideas—if they work, how can you expand them? If they fail, why did they fail and what have you learnt about your audience that you can apply to future work? It’s constant learning, constant adapting—and a constant headache… but it’s FUN.”

On a Sterling Woods Group CEO Campfire Chat a few weeks ago, Sam Yagan, vice chairman of Match.com and co-founder of OkCupid, Tinder and SparkNotes, was asked by Rob Ristagno, “What was one of the first things you did when you became CEO?”

“When I took over Match, I realized that they use data, but the expectation—which was always data-driven—was that tests will all succeed,” Yagan said. “It wasn’t built in a culture of failure. For me, that failure was a requirement of learning, a corollary of ambition. ‘What is this? That’s the failed SpaceX launch.’ Is [something great] realistic without failing along the way?

“I compare never failing with not having ambition,” Yagan continued. “[So the question became,] how do we let ourselves test out our intuition? The intuition has to inform what data you get.”

He said that one of the keys to OKCupid’s success was the level of trust that they built with their audience. That reminded me of something Tim Hartman, CEO of GovExec, once told us. “Create a culture to build trust and collaboration, and breaking down silos. Think ambitious experiments and trust each other. If you look around and don’t see that, you have a problem.”

Learning about 1105 Media’s culture from Schneider should be eye-opening. And while publishers and media companies are looking forward to getting back to in-person events as soon as possible, it also will be good to hear from Hackes on keys to the virtual segments of events. With travel restrictions still in place for so many countries—including Canadians coming to the U.S.—it will be important to keep the international audience that we’ve all worked hard to get.

Again, register here for Thursday’s exciting event, which will leave plenty of time for discussion and Q&A.