I’m sure many of us have googled ourselves to see what comes up. Chris Bakke, co-founder and CEO of Laskie, goes one better: He applies for jobs at his own company to see what the process is like.

This really resonated for me as I have a good friend applying now for editorial positions, so I’m hearing stories from her. Writes Bakke in Fast Company: “I’ve applied to jobs at my own companies for the last eight years, and every year I come away from this experience with a list of things to fix and improve, and a list of things to congratulate our hiring team on for tackling so well. Spending a few hours doing this each year has been one of the most transformative uses of time spent on evaluating the hiring process, and it’s something I recommend to all leaders in this challenging talent market.”

In both our Editorial Council meetings over the last month—virtual and then in-person at the Neal Awards—the challenges of finding and hiring editorial talent has been a huge common denominator. Yes, the ability to be remote has helped. MJBiz, which was just acquired by Emerald for $120 million, credits some of their growth to being able to expand their editorial pool from Denver to all of North America. But competition is still fierce, finding diverse voices a big challenge, and new remote people require extra-special onboarding, so it becomes even more important to get it right. 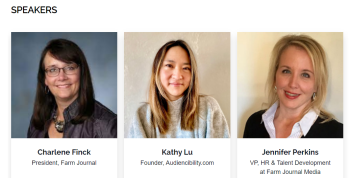 “Among the things that I recommend for companies to think about is looking at your job application and what you’re asking,” said veteran journalist Kathy Lu, founder of Audiencibility, at our recent Editorial Council meeting. “Try to make it as simple for the job applicant as you can so they’re not trying to play this guessing game with you. And that actually can reflect really well on who you are as a company, because it shows that you care for their time.”

Here are more ideas from our Edit Council and Bakke on the recruitment process:

Develop an internship program. This has come up across the board. Jennifer Perkins, vice president, HR & talent development for Farm Journal, spoke about the success of their college internships and said that they are making specific efforts at diversity and inclusion, a challenge in the ag market. “It’s about developing relationships at events but also looking outside those traditional ag channels. So we have leveraged our relationship with the Cultivating Change Foundation, which is a business advocacy group for agriculture,” she said. “Many college campuses help us find talents, like I said, in those non-traditional ways so that again we’re bringing people into Farm Journal that are more diverse and bring rich backgrounds with them.”

“Set timers per interview stage: There are rarely reasons why any individual stage in the hiring process should take more than five business days,” Bakke writes. He suggests allowing recruiters to see metrics on how long candidates sit from initial application to initial resume review, to first phone screen. If a stage is too long, you can fix it.

“It’s just really, really important to connect with your candidates,” said Perkins. “So that they feel like they’re part of the process. What we’re seeing, I’ve never seen in my almost 30 years of HR—candidates ghosting us at the rate that they are… Again, developing those new and different ways to connect and to build relationships with those candidates so that they feel part of the process, and they feel like they have a stake in the outcome has been really, really important.”

Offer candidates the chance, at some point, to “spread their wings.” In our Edit Council meeting, Charlene Finck said that she served many company roles before being named president of Farm Journal in March of 2020. (Talk about having to be a virtual expert.) She takes pride in “serving agriculture that’s not just the industry, but the farmers and ranchers and growers who grow the things that we eat.” She credits a company “that’s allowed a lot of room to spread your wings and try other things, or do other things and innovate and bring forward business plans for new products, etc. I don’t like to do the same thing every day, so that’s been very helpful. I’ve had a myriad of roles, everything from running all of our content team for many years to being just the ninth editor of Farm Journal magazine in its 145-year history. This role I enjoy the most because I like being able to contribute on multiple levels in multiple places and being in the middle of things.”

Look at your language and qualifications. There was a 2022 Neals finalist article about the line trade from Endeavor Business Media’s T&D World. “In the past, a lot of the prescreening and testing positioning the top candidates requires them to have some background in the trade,” said Barry Anderson, Duke Energy’s regional senior vice president of customer delivery in Florida. “For example, they may have a family member who was a line worker. That puts the minorities at a disadvantage. We are trying to break the wall down, expose them to the craft and give them the sense of what it takes to do the work.” Publishing is a different trade but try to have a more open mind. Lu said that publishers and media companies need to take a close look at their job qualifications, especially for internships. Any language that contains biases or limits your pool should be removed. She cited one Washington Post example that required their interns to have major news outlet experience.

“Assign a full-time scheduler to the recruiting process: Most leaders think, ‘We already have admin assistants or recruiting coordinators, so we’re good,’” Bakke writes. “The reality is, these jobs are extremely complex, so assigning someone whose singular responsibility it is to schedule interviews is a game-changer for actioning candidates quickly between each step in the process.”

“Use the Rule of Four. Todd Carlisle, who ran staffing/HR at Google, then Twitter, found that four interviews are enough to predict whether or not to hire someone with 86% confidence,” Bakke writes. “Every additional interviewer after the fourth person only adds ~1% of predictive power.” Another friend of mine just went through six-plus interviews with Amazon only to be shut down with a quick, insensitive email.

Be fair with your tests and asks. “Some companies ask for a lot when it comes to your job application and edit tests,” Lu said. She talked about editing a 2000-word story and having to give multiple story ideas. Been there, done that. “If they’re applying to, say like five jobs—which technically they’re probably applying to more—and if every job is requiring all these different things it’s very, very exhausting.” I have heard this loudly from my job-seeking friend. “It’s also exploitative because we are asking them for their time to do this work and not paying them for it,” Lu said. “Even things like open-ended questions—say send us a cover letter—that can be really difficult for somebody to figure out what you want. Try to be a little more specific.”