In 2017, Tony Uphoff, CEO and president of Thomas—“not even a year into my tenure”—met Xometry CEO Randy Altschuler. After some initial talks, they asked, “Is there a partnership here?” and said that they would stay in touch.

“Then in July of this year, Randy called me: ‘We went public. Business is booming. Can we have a conversation?’” Uphoff told me this morning, just before entering a virtual Town Hall with Altschuler to tell the 270 or so Thomas staffers where that conversation led to: the acquisition today of AM&P Network member Thomas (Thomasnet.com) by Xometry on a cash-free, debt-free basis for $300 million (according to a Xometry release).

“Their model is astoundingly complementary to ours,” Uphoff said. “Our model provides advanced programs for the supplier side, and the buyer uses our platform. They monetize the buyer side. We monetize the supplier side. In joining forces, we’re uniting our products with the power of the Xometry marketplace so we can do even more for industry together.”

Both companies lead the way in digital transformation. Thomas brings buyers and sellers together on its powerful platform, Thomasnet.com—it boasts more than 1.3 million registered users (including 93% of Fortune 1000 companies) and more than 500,000 commercial and industrial sellers, including 45,000 diversity certified sellers. Every year, more than 20 million sourcing sessions are initiated on Thomasnet.com, generating extensive first-party buyer intent data across multiple sectors.

Xometry uses its technology to create a marketplace that enables buyers to source manufactured parts and assemblies, and empowers sellers to grow their businesses. At the end of Q3 2021, Xometry had 26,187 active buyers, including nearly 30% of the Fortune 500. Leveraging AI and machine-learning technology, the Xometry marketplace provides immediate pricing, delivery lead times and quality assurance, as well as a suite of financial products. 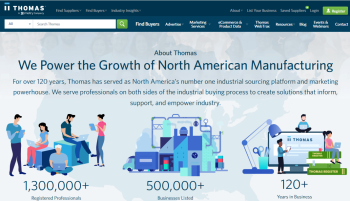 Thomas will remain an entity and a brand—Thomasnet.com. Uphoff explained why it made sense on so many fronts to pursue this. “It will accelerate the growth of Thomas,” he said. “We have big ambitions. The opportunity to bring these two companies together [was significant]. As a publicly traded company, they have access to capital. In our ambitions, that factors in there as well. We were literally not for sale. That was true when Xometry called. Of course, like every transaction, dollars and cents matter. But it was less about that than the fact that every constituency wins here—that’s really rare.

“Not only does our operating division benefit, but [the acquisition] creates new career paths, opens opportunities on both sides, the shareholders win, employees win, users of our products win, the industry wins.”

Xometry’s ascent has been a rapid one. Founded in 2013, they’ve made a few other acquisitions since 2018, raised about $150 million in venture capital funding and went public in 2021. It’s quite a different path from the 123 year-old, family-owned Thomas, but the two CEOs found much common ground.

“I average a phone call a week from someone, [mostly] from private equity, reaching out,” Uphoff said. “But what helped in this case was we have a common vision. That can be an overused expression but was really true here. [Randy and I] started finishing the back half of each other’s sentences—talking about serving manufacturers, accelerating digital transformation and growing the industry, And just having a common DNA.”

Interestingly, I read this from an Oaklins DeSilva+Phillips email this week: “Rather than halting M&A activity as some feared, the pandemic has led to one of the hottest M&A markets in history and has increased the importance many companies put on using M&A to fuel growth and resiliency. That growth and strategic importance is expected to further increase according to a new Harvard Business Review Analytic Services study.”

Though this deal took four years to take place after the initial conversations, things are now happening fast. On their website, under the heading of “Thomas For Industry,” sits “A Xometry Company.” “The process has already started; we’re working parallel on really getting to know them,” Uphoff said. “We’ll benefit by getting to know each other, collaborating on technology roadmaps, work flow and other things.”