“Hello everyone and welcome to Restaurants Rise powered by Mufso. I hope you’ve enjoyed the content today and are connecting with your colleagues in the community. I’m Bret Thorn, senior food and beverage editor, Nation’s Restaurant News and Restaurant Hospitality, and I’m very happy to be bringing you a live version of my podcast.” 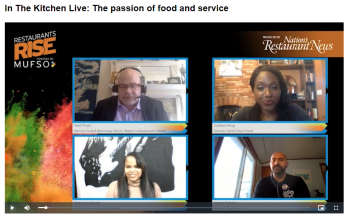 The series splashed mightily for a new Neal Awards category—Best New Product. It so happens that category is in need of more entries for 2022, I’m told. The others are Best Climate Change Coverage; Best Overall Art Direction/Design; Best Art Direction for a Single Article; and Best Technical/Scientific Content. But, of course, all categories remain very much in play. All nominations need to be in by  Jan. 7.

“Restaurants Rise was the largest team effort we’ve undertaken, at a time of severe disruption for all,” said Sarah Lockyer, group director and publisher of the Informa Restaurant & Food Group and NRN. “We knew our audiences—both operators and suppliers—needed to connect, learn, lead and inspire together. Our teams across editorial, events, marketing, sales and operations jumped in… I’m so proud we’ve been recognized with this award.”

Address an important issue and find special partners. Zonda Media’s ARCHITECT Magazine won for Best Single Issue of a Tabloid/Newspaper/Magazine for The Carbon Issue—guest edited by the non-profit Architecture 2030. Here’s the kickoff: “This special issue of ARCHITECT… is meant to help architects get CO2 out of their systems, for the health, safety, and welfare of us all.” Partnering with a non-profit gives the issue more heft and another vehicle to amplify its profile. I especially like the Next Progressives Q&A where they spotlight Alda Ly Architecture. “What led to the founding of the firm: I’m a woman of color working in a field traditionally dominated by men. Initially, this launched me on a path designing for women, but it quickly morphed into designing for those who aren’t typically considered.”

Use a podcast to encourage subscriptions. Arizent’s American Banker won the 2021 Neal Award for Best Podcast for its amazing 5-part series, Access Denied: Systemic Racism in Financial Services. I listened to an episode on “The Financial Media” recently, and it is eye-opening. It was so engrossing that, of course, I then moved on to a second one and encountered a paywall. It flashed very tempting “special introductory pricing” for subscriptions where you can choose from $41 a week for a month, $29 a week if you subscribe annually—highlighted on the page—and $35 a week if you subscribe for 6 months.

Augment a major story. Winsight won in Best Subject-Related Package for Making Sense of Evolving Kitchens. As you progress through the story, you get links to other stories that delve further, such as: How Small Chains Are Growing With Ghost Kitchens; The Kitchen as Filming Studio; and COVID-19 Clears a Path for More Restaurant Robots. The digital design is also impressive—graphics and photos float in as you scroll, video and pull quotes pop up. It’s a fun and informational read.

Provide tools/new ideas for our audience – part 1. Industry Dive’s Restaurant Dive won for Best Series for six articles with the first story titled, Mapping the Rise of Ghost Kitchens. “Dark. Ghost. Host. These are just a few of the names for the budding restaurant segment rising from the economic upheaval of the novel coronavirus pandemic,” it begins. Not only do they go in-depth, but they also created a “ghost kitchen calculator to help operators assess the financial profile and determine profitability of a ghost kitchen before developing their own concept.” Talk about meeting audience needs. Think about what value-add you can give to an article you’re doing.

Provide tools/new ideas for our audience – part 2. For Best Profile, American Chemical Society’s Chemical & Engineering News won for a profile titled A Day With Jennifer Doudna: Trying to Keep Up With One of the World’s Most Sought-After Scientists. It chronicles the day she spoke at the University of California, Berkeley campus. “It’s clear that being considered the Beyoncé of science has reshaped Doudna’s life. But has it reshaped how she views herself?” The article leads to a sidebar story titled Jennifer Doudna’s Tips for New Entrepreneurs. One story presents the person, and the second presents how to help their audience succeed. The main story is written as a timeline of her day. This would also work well as a video.

Complement a story with a survey report. SHRM won a Neal for Best Instructional Content for a story titled How Should HR Handle Political Discussions at Work. “It was just a picture, and it was in an employee’s cubicle,” the story by Susan Milligan begins. The article refers to a “SHRM poll conducted last October [that] found that 42% of employees have had a ‘political disagreement’ at work, and 12% have experienced political affiliation bias.” The link led to an 11-page, beautifully designed pdf with results from that poll. “Over half of working Americans say politics and the discussion of political issues have become more common in the last four years.” With the poll, pull quotes and fun wordplay—“While HR can hardly have Aretha Franklin’s iconic song ‘Respect’ playing on a loop, there are some actions HR and legal experts advise”—it’s a valuable and engaging story for members.