However, unlike many of its peers in B2B media, Winsight has not jumped on the virtual event bandwagon. “We will never do a virtual event,” says Amanda Buehner, Executive Vice President of Convenience Media and Events. “They don’t work. In our space, we have restaurant owners and operators who can’t spend a couple hours away from their jobs. Webinar attendance and engagement were going down even before the pandemic. We knew we needed to do something different.” 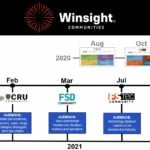 Each community is built around three pillars—community, content, connection. “The community part is about the audience,” says Buehner. “Our live events can draw a couple hundred to several thousand attendees. With a virtual platform, we can reach more than that and knew we wanted two-way discussions instead of webinars just speaking at you.”

The communities produce new content each week that Buehner describes as “raw and real,” including “Talks from the Top” interviews with C-suite executives, Origin Stories on how industry figures got their start and By the Numbers, featuring industry metrics and analytics supplied by Winsight’s data and research arm, Technomic.

Within the communities, Winsight handpicks 20 VIP members to be part of Share Groups that have direct conversations around topics such as workforce, technology and more.

There is no fee for participants but members must provide registration information as well as answer drill-down questions on their qualifications, budget authority, need and timing. Each sponsor gets to meet these qualified retailers/operators one-to-one.

“If you can connect me, as a supplier, with people who are not only registered but also have the excitement, the need, the budget and the authority to purchase say, open air refrigerators for restaurants, that’s cool,” says Buehner.

The Communities are built on a proprietary platform that Winsight developed in-house that locks into a user’s single Winsight sign-on, while discussion boards run on Vanilla Forums.

Every week, a dedicated e-newsletter for each community targets between 40,000 and 80,000 uniques touting new content and upcoming programs.

“E-newsletters are the biggest push,” says Buehner. “We’re also doing social media for branding and air coverage and using every tactic possible within our own sites, including interstitials and chat bots. For Restaurant Community, we have more than 2 million impressions within the Winsight platforms and social media.”

Buehner expects thousands to register for Restaurant Community over the next few months. While the initial three communities launched last year had lower user targets (due to only being live for three months), each exceeded their goal, she adds.

The communities are monetized exclusively via sponsorships, which command between $7,500 and $50,000 and offer three components:

“This is all-hands-on-deck,” says Buehner. “We told people across the company that we needed between 20 percent and 80 percent of their time to get this up and running.  We all learned new jobs in the last six months–marketing teams that were doing live events previously are now doing communities. We had to retrain our sales team to sell communities and convey value.”

Fifteen different areas within Winsight collaborate on the communities, including Content, which manages speaker topics and recruitment; Platforms, which vet the technology and manage logins and registration; Sponsor Relations, an existing team that now pivoted to selling community sponsorships rather than booths; Editorial, which runs discussion boards and moderation; and Recruiting, an essential component of building and maintaining the communities.

“You can put out two million impressions promoting these communities but it’s those personal relationships that get these owners and operators to register,” says Buehner. “We have a whole team that’s constantly sharing the story of the value of our communities.”

With most of the industry hopeful for the return of live events in the second half of 2021 (Informa recently saw a stock jump when it announced plans to resume live events in the U.S. in June), digital communities will continue to play a major role going forward, according to Buehner.

“This is another touch point for our audience and sponsors,” she adds. “We will continue the communities since not everyone can attend every live event, but they can always make it to a community. For sponsors, this is a great complement to our live event—they can meet with potential partners then see them at the live event. We set goals internally for these communities and three weeks into 2021, we’re halfway there already.”